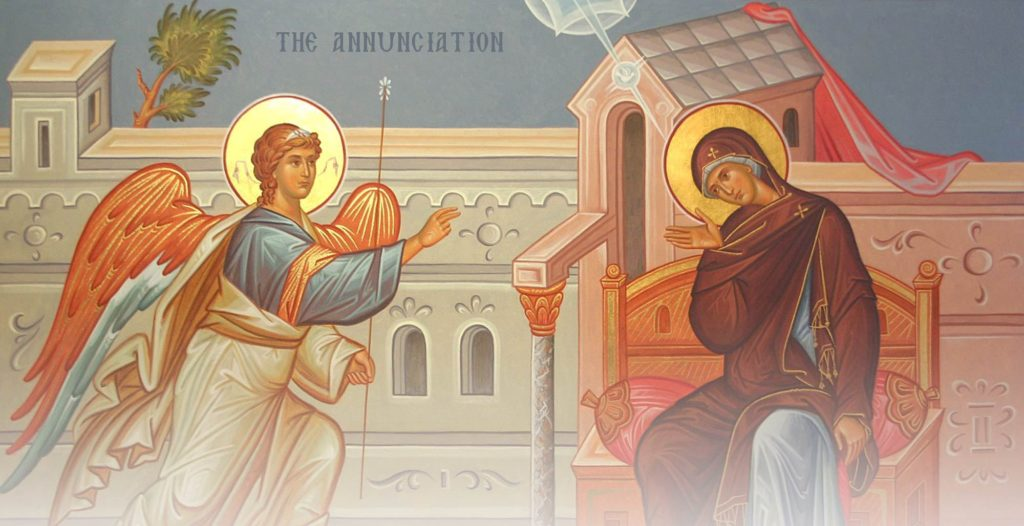 The Feast of the Annunciation of Our Most Holy Lady, the Theotokos and Ever-Virgin Mary is celebrated on March 25 each year. The Feast commemorates the announcement by the Archangel Gabriel to the Virgin Mary that our Lord and Savior Jesus Christ, the Son of God, would become incarnate and enter into this world through her womb.

The biblical story of the Feast of the Annunciation is found in the first chapter of the Gospel of Luke (1:26-39). The Archangel Gabriel appeared to the Virgin Mary, who was living in Nazareth, and said to her, “Hail, O favored one, the Lord is with you.” Mary was perplexed and wondered what kind of greeting this was.

The angel told her not to be afraid, for she had found favor with God. He said, “You will conceive in your womb and bear a son, and you shall call his name Jesus. He will be great and will be called the Son of the Most High; and the Lord God will give to him the throne of his father David, and he will reign over the house of Jacob forever; and of his kingdom there will be no end.”

Mary responded to the angel by asking how this could happen since she had no husband. The angel told her that the Holy Spirit and the power of God would come upon her, and that the child to be born of her would be called holy, the “Son of God.”

The angel then proceeded to tell the Virgin Mary that her cousin Elizabeth had conceived a son in her old age (John the Baptist), and affirmed that with God nothing is impossible.

In faith and obedience to the will of God, Mary replied to the angel, “Behold, I am the handmaid of the Lord; let it be according to your word.” Upon her response, the angel departed.

It is on the Feast of the Annunciation, that Orthodox Christians commemorate both the divine initiative of God, whereby He took on flesh from the Virgin for our salvation, and the human response, whereby Mary freely accepted the vocation offered to her. He elected to become man, and He desired to do this with the willing agreement of her whom He chose as His mother. Mary could have refused, for she was not a passive instrument, but an active participant with a free and positive part to play in God’s plan for our salvation. Thus, when on this and other feasts the Orthodox Church honors the Theotokos, the Mother of God, it is not just because God chose her but also because she herself chose to follow His will.

Apolytikion & Dismissal Hymn of The Feast of The Annunciation

Today is the summary of our salvation, and the revelation of the age-old mystery. For the Son of God becomes the Son of the Virgin, and Gabriel announces the good news of grace. Therefore, let us join him, and cry aloud to the Theotokos: “Rejoice, Maiden full of grace! The Lord is with you.”

Our ParishOur Patron SaintOur LeadershipOur CateringContact Us
JOIN OUR LISTSERV