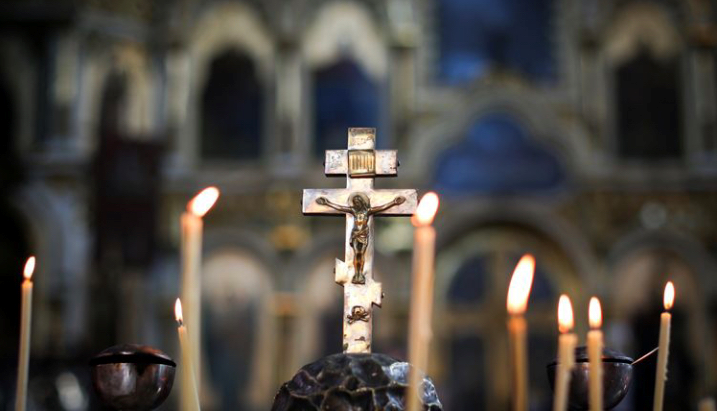 The life and the body of every baptized Christian is considered sacred because it has on it the sign of the Holy Spirit through the Sacrament of Chrismation, which he or she received on the day of Baptism. Also, a baptized person is considered part of the body of Christ, according to the teachings of the Bible. So, while a person is alive, the body and the soul live together; at the time of death the soul departs from the body to go to judgment and the body returns from where it was taken to the ground.

The body even at death is respected because it was the temple that carried the spirit. This is why, at the funeral service, the body is brought to the part of the church called the solea where he or she was baptized and married.

The Orthodox Church has rituals before and after death which can be traced to the Old Testament. First, when somebody is seriously ill and the doctors tell you that he/she is in their last days, you immediately call upon the priest and he reads the appropriate prayers. If the ill person has their mental capacity or is of sound mind, the priest will ask him or her to confess and then gives the person Holy Communion.

Funeral services in the church building are conducted for those who are Orthodox Christians in good ecclesiastical standing with the Church. In other words, only those who have been baptized and/or chrismated in the Orthodox Church, and have had their marriage blessed in the Church are eligible for an Orthodox funeral service in the church building. If there is a question, please contact Fr. John.

Should there be a death in the family, the following steps should be taken:

The church has no objection to autopsies for the sake of determining the cause of death or to further medical science, or to the donation of any body organs (eyes, heart, etc.) for transplants. However, because the human body is the Temple of the Holy Spirit, the Orthodox Church insists that those who perform autopsies accord the utmost respect for the body.

Arrangements for the funeral service must be made with the priest in conjunction with the funeral director. No funerals are allowed on Sunday, the day of the Resurrection of our Lord.

Some families prefer memorial donations to flowers. Such being the case, special envelopes are available to the funeral director and family at the church office or in the narthex of the church. Acknowledgements to the donors are made by the church and a list is sent to the family.

In the event of suicide, funeral rites are usually not accorded the deceased, unless the family acquires a letter from the family physician stating the deceased was under treatment for psychotic or emotional disorder. The Church believes that no one is permitted to take the life of another, especially the life of oneself. Suicide is murder and consequently a grave sin. Committing suicide signifies a loss of patience, hope and faith in God. A person of faith does not lose hope, no matter how great the difficulties he or she faces. If there is a question, Fr. John should be contacted.

Various Christian groups, instead of burial, prefer the cremation of the dead, which was customary among many ancient peoples. The Orthodox Church, however, mindful of the fact that the human body is the temple of the Holy Spirit and inspired by the affection toward her departed children refuses to deliberately destroy the body, and has adopted the burial of the dead, as it appears in the catacombs, and in the graves of the martyrs and saints. Cremation, therefore, is contrary to the faith and tradition of our Church and is forbidden to Orthodox Christians. A church funeral is denied to a person who has been or will be cremated.

The death of a Christian not only affects the family, but also the entire Church, for we are all part of the Body of Christ. The Orthodox Funeral service, which expresses this fact, is not to be seen primarily as an opportunity to extol, in a sentimental way, the virtues of an individual. Rather, the various prayers and hymns emphasize the harsh reality of death, as well as the victorious Resurrection of Christ through which the power of death is conquered. The Funeral Service comforts those who mourn; it is also the means through which the Church prays for one of its members who has died in the faith of Christ. Orthodoxy views the end of physical existence only as the termination of one stage of life. God's love is stronger than death, and the Resurrection of Christ bears witness to this power.

The Orthodox funeral consists of three services. First, there is a vigil service after death, which is usually conducted at the time of the wake. This service is called the Trisagion Service. The Church prays to Christ "to give rest with the saints to the soul of Your servant where there is neither pain, grief, nor sighing but life everlasting.” While the Church prays for the soul of the deceased, great respect is paid to the body. Orthodoxy believes the body of the Christian is sacred since it was the temple of the Holy Spirit.

The body will share also in the final restoration of all creation. The Funeral service is continued at the church, where the body is brought on the day of burial. Ideally, the Divine Liturgy is celebrated. After the Funeral service, the congregation offers its farewell to the deceased, known as "last kiss". The Trisagion service is repeated at the graveside.